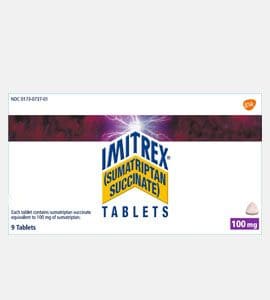 There are 22 users looking at this product right now

Dosage
Quantity
Price
To cart
100 mg
30 pills
$199.63
100 mg
60 pills
$296.08
100 mg
90 pills
$392.53
100 mg
120 pills
$488.97
100 mg
180 pills
$680.75
Description
Common use
Sumatriptan is a drug that is used for treating migraine attacks with or without the presence of an aura, to relieve cluster headache attacks.         Sumatriptan is a Specific and selective agonist of 5-HT1-serotonin receptors localized mainly in blood vessels of the brain. Migraine headaches are believed to be stipulated by widening of blood vessels in the brain. Sumatriptan causes vasoconstriction of the carotid arterial bed which provides extracranial and intracranial tissues with blood without a significant impact on cerebral blood flow. It also inhibits the activity of receptor which are responsible for the transmission of pain signals by nerves to the brain.
Dosage and direction
Treatment with Sumatripan should be done just before the starting of a migraine attack. Recommended oral dose of adults is 25-50 mg, the dose maybe increased up to 100 mg if necessary. The medication is effective at any stage of the attack but if it does not help during the attack additional dose should not be taken. Treatment with Sumatriptan should be continued to prevent the next attack. Tablet of Sumatriptan should be swallowed whole, take it with a big glass of water. Usual intranasal dose of 5-20 mg may be increased to the maximum dose of 40 mg daily.
Precautions
Sumatriptan is used only to treat an acute, classic migraine attack or a cluster headache, it should not be used for treatment of certain unusual types of migraine. Patients with uncontrolled high blood pressure should not use Sumatriptan.
Contraindications
Hypersensitivity, basal, ophtalmoplegic, hemiplegic forms of migraine, ischemic heart disease (including suspected it), angina (including angina Printsmetala), myocardial infarction (also in history), hypertension, peripheral arterial occlusive disease, stroke or transient cerebrovascular accident (also in history), liver and kidney failure. Cautiousness should be exercised in patients with epilepsy (including any condition with low epileptic threshold), hypertension, pregnancy, breastfeeding, in infants and adolescents (younger than 18 y.o.), in patients older than 65 y.o.; simultaneous intake of medications which contain ergotamine and its derivatives, MAO inhibitors, and also during the period of 14 days after their cancellation.
Possible side effect
This medication is usually well tolerated and adverse reactions are not expected. Most frequent side effects include pain or tightness in the chest or throat, tingling, flushing, weakness, dizziness, abdominal discomfort, sweating, nasal irritation, and injection site reactions. Allergic reactions as adverse reactions of organism to Sumatriptan are also possible.
Drug interaction
Co-administration with ergotamine and medications containing ergotamin may develop a continued spasm of blood vessels (the interval between administration of these medications must be at least 24 h). Interaction of Sumatriptan and MAO inhibitors (isocarboxazid (Marplan), phenelzine (Nardil), tranylcypromine (Parnate), and procarbazine (Matulane)) is also possible resulting in increased concentration of Sumatriptan. Concomitant use of Sumatriptan with selective serotonin reuptake inhibitors or SSRIs, including fluoxetine (Prozac), citalopram (Celexa), paroxetine (Paxil), and sertraline (Zoloft) or serotonin and norepinephrine reuptake inhibitors, including venlafaxine (Effexor), duloxetine (Cymbalta), and desvenlafaxine (Pristiq) may promote weakness, hyperreflexia and poor coordination of movements.
Missed dose
Sumatriptan is not meant for regular use, it is taken only during an attack.
Overdose
Be especially attentive to such symptoms as bluish tinge to the skin, convulsions, dilated pupils, inactivity, lack of coordination, paralysis, redness in the arms and legs, skin changes at the site of injection, slow breathing, sluggishness, tremor as they may be signs of Sumatriptan overdose. Inform your health care advisor immediately about your condition nor seek for emergency medical help.
Storage
Store this medication at a temperature of 2-30 C (36-86 F) in a tight container resistant to light and moisture.
By Cathy Wong | Claudia Chaves, MD Medically reviewed by
Updated on 26.09.2022
Write your review
Related Products
© 2022 Empty