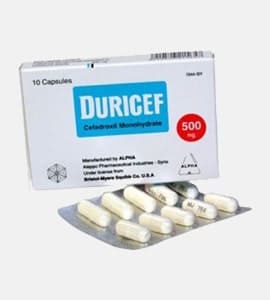 There are 26 users looking at this product right now

Thank you! You will be the first to know this product becomes available again.

Description
Common use
Duricef belongs to the cephalosporin family of drugs, it causes bactericidal effect violating cell wall formation. It acts against a broad spectrum of gram positive bacteria like Staphylococcus. (both producing and non-producing penicillase) Streptococcus and gram negative microorganisms (Shigella, Salmonella, Escherichia coli, Haemophilus influenzae, Klebsiella, some strains of Proteus). This medication is used to treat infections of respiratory system, urinary tract, pelvic organs, skin and soft tissues, osteomyelitis, eye infections, etc. which are caused by susceptible microorganisms as well as for prevention of endocarditis, infectious complications after surgery.
Dosage and directions
This medication is recommended to take once or twice daily. A daily dose is 1-2 mg. Dosage is administered individually and should be corrected for children.
Precautions
Avoid drinking alcohol during your course of treatment. Special attention should be paid to the possibility of pseudomembranous colitis development and toxicity caused by Clostridium difficile. If symptoms of diarrhoea are not serious they disappear after the medication intake was discontinued. Inform your doctor if you are pregnant or going to become pregnant before to take this drug.
Contraindications
Hypersensitivity to Durisef or penicillins and penicillamine, pregnancy, breastfeeding. Cautiousness should be exercised in patients with chronic kidney failure, colitis in history.
Possible side effect
You may experience diarrhea, inflammation of the bowel (colitis), nausea, redness and swelling of skin, skin rash and itching, vaginal inflammation, vomiting, seizures in rare cases and only your doctor make decide correctly if there is need for you to continue to take this drug.
Drug  interaction
Duricef increases toxicity of polymyxins and aminoglycosides, diuretics affecting loop of Henle in kidneys. Risk of bleeding increases in combination with inhibitors of platelets aggregation and non-steroid anti-inflammatory medications.
Missed dose
Never take a double dose of this medication. If you take Durisef once daily skip your missed dose and take the medication as soon as you remember, next dose should be taken in 10-12 hours. If you take Durisef twice daily the period between doses should be 5-6 hours.
Overdose
In case of serious and persistent seizures, allergic reaction (hives, rash, swelling of face and tongue, vaginal itching), diarrhea or kidney failure consult your doctor.
Storage
Store at room temperature between 59-77 degrees F (15-25 degrees C) away from light and moisture, kids and pets. Do not use after expiration term. Suspension can be used during 14 days after its preparation and should be kept in a refrigerator.
By Cathy Wong | Claudia Chaves, MD Medically reviewed by
Updated on 28.11.2022
Write your review
Related Products
© 2022 Empty